How To Treat Haglands Heel Bumps 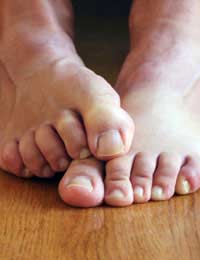 Haglunds heel bumps are formations of bony material that appear on the back of the heels. As the bony enlargement develops a small fluid filled sac can also develop which is called a bursa. When this sac becomes inflamed a condition called bursitis can occur which is very painful in most cases. It may also cause sensitivity and inflammation of the surrounding tissues such as those associated with the Achilles tendon.They can appear on either foot or both equally.

The deformities may be caused by the gait of the person as those who have a tendency to walk on the outer side off the heel may find they are more susceptible to the condition.It is also thought that genetics may play a role as the bone structures may be common amongst family members and generations.

The most obvious sign that a person may have a Haglunds deformity is a noticeable bump on the back of the heel area around the site of the Achilles tendon.Pain may also be a factor as the condition may only be detected when someone reports pain to their doctor and an examination and often an X-ray has taken place during which the bone structures can be seen clearly.Swelling and redness may be seen in those who are suffering with pain and this will increase as the inflammation develops and the area becomes more sensitive.

Initially the condition may be treated conservatively as this is less invasive and means the person is less likely to suffer side effects and complications of invasive methods.Pain relief, rest and ice application may help to reduce the discomfort, redness and swelling of the area which may be enough to ease the condition during flare-ups.

Exercises that have been specifically developed by physiotherapists may be very beneficial as this will encourage the Achilles tendon to stretchy which will relieve the pressure of the tissues on the bony structures which in some cases may be sufficient to solve the problem.

Those with hereditary problems such as high arches may find that orthotic devices such as heel pads or shoe inserts may help as this will relieve many of the problems associated with high arches.Soft shoes and those that do not contain hard or constricting backs may help as these will allow the foot and heel to assume their natural shape incorporating the additional bony structure that is a Haglunds bump.It may mean that the person must wear specially made shoes or summer shoes for most of the year, which may be the best option if other measures are to be avoided.For those who have not had any success with these methods or those whose bump protrudes quite significantly surgery may be recommended.

A specialist foot and ankle surgeon will assess your suitability for surgery and if recommended will shave the excess bone off the shape of the heel bones using specialised tools. This may be performed under a general anaesthetic or using a spinal anaesthetic.Most patients who have this type of surgery can expect to wear an immobilising cast for some time after the operation meaning the foot and ankle are immobile while the wound heals and the internal tissues can recover.

Haglunds bumps are small bony apertures that occur on the heel. They can be painful and cause inflammation and will often need some sort of intervention during these episodes.Treatment options may include surgery but this will not be offered until all other options have first been explored and proved to be unsuccessful.

How to Reduce Cankles